Four new entries into the Top 10. 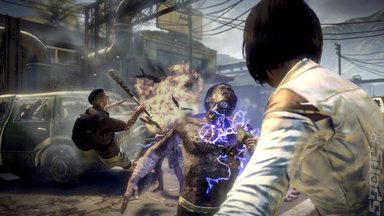 This week's UK video game chart is a triumph for marketing departments, as zombie-filled snore-fest Dead Island has ran away with the #1 position.

The game generated a large amount of hype following a heart-tugging teaser trailer - one that the final product failed to live up to as critics panned it left, right and centre.

Still, the week wasn't lost for other big-hitters - THQ's Warhammer 40,000: Space Marine debuted at #2, while Resistance 3 earned Sony a nice #4. Nintendo proved that it can still make a fourteen-year-old game relevant in today's market as Star Fox 64 3D takes #9.

While Dead Island was critically panned and commercially well-recieved, it seems the reverse was true for artistic Japanese adventure title El Shaddai: Ascension of the Metatron. The game, based loosely on the Bible, failed to enter the all-format Top 40, although it did reach #27 in the PS3 chart and #37 in the Xbox 360 chart.