Steam vs Microsoft: Team Meat Come Out Fighting (Yet Again)

They're not too shy about holding back. 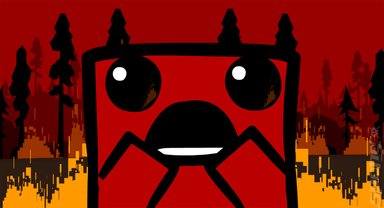 You'd have thought he'd be used to their potty mouths.
Nearly a year after the release of the acclaimed Super Meat Boy, Team Meat (Edmund McMillen and Tommy Refenes to their friends) are gearing up to put out their follow up title, The Binding of Isaac. In an interview with IndieGames.com, the pair discussed the trials of making their new game, how they'll never work with Microsoft again and more.

First up, The Binding of Isaac. It sounds horrible yet brilliant, with you playing a boy trapped in a basement attempting to escape his homicidal mother. It also happens to be half roguelike adventuring, half action shooter, as hard as you like with only one life ? should you die, that's it. Naturally, this being Team Meat it's far from normal with the weapon of choice in Isaac being your own tears. The guys aim to make each playthrough as different as possible with the inclusion of "as much random happenings, items, enemies and other stuff to make it so that it's entertaining each time."

One thing that Team Meat isn't happy about is how the relationship between Microsoft and themselves deteriorated. McMillen feels like they've been poorly treated by Microsoft despite producing a game he was proud of. "Whenever we ask -- and we actively ask monthly if we can be included in a sale or get any kind of promotion -- they say no," he claims. Sales on 360 of Super Meat Boy have apparently tanked while remaining solid on PC.

On the subject of PC gaming, Steam inevitably gets a lot of coverage. The service is referred to as "a fucking powerhouse" with a support team that knows what they're doing. "They really know what they're talking about," says Refenes. He advises indie developers to "use them as a resource, and talk to them."

The interview also covers plans for the future. McMillan mentions that "Isaac is kind of a prototype for some stuff that I want to play around with in the next game." They also swear that there's a Mac version of Super Meat Boy on the way and that they'd like to develop for other systems including Nintendo's 3DS. It's still up in the air though, because as indie developers they firmly believe that their games need to come out on PC as well; "PC is crucial, and PC is very alive and kicking at this point," insists McMillen.

The full interview is available over at IndieGames.com ? go, listen and enjoy!