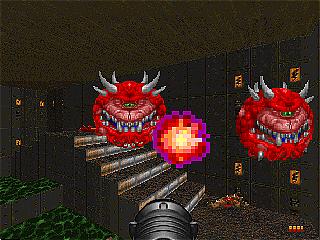 Back in the olden days of gaming Doom happened and 'changed everything' except in Germany that is where it was banned. Now it isn't. Which is good for Bethesda, given that the game is available on iOS devices now.

Yes, in 1994 the game - that was actually terrifying and great - was put on an index of controlled titles in because it was "deemed likely to harm youth" in Germany.

According to the BBC, "Like pornography, sales of the violent shoot 'em up were restricted to adult-only stores."

The reason? "The restrictions on Doom and Doom II officially expired on 31 August following a meeting of the Federal Department for Media Harmful to Young Persons (Bundesprufstelle) earlier in the month."

Bethesda, which owns original Doom dev id Software appealed the Bundesprufstelle which controls the list. It "argued that the game's crude graphics had been surpassed by many modern titles and, as a result, the violence it depicted had far less of an impact."

It seems, however, that appeals were irrelevant because Doom is now "mainly of historical interest" and more violent games are available anyway.

You can still yell in a shrill manner because the American version of Doom II is still banned from sale "because it incorporates two levels from Wolfenstein 3D which makes use of Nazi symbols including swastikas."