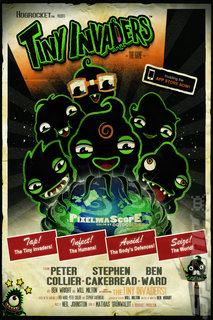 Tiny Invaders is a tap-heavy puzzle-action affair that sees players lead germ-sized aliens to world domination. You do this by taking over human bodies, moving from person to person until you reach the President of the United States.

Germs dart around racetrack-style stages to collect orbs and avoid white cells. A time-based ranking feature (the faster you are, the more stars you collect) looks to bring with it the same sort of addictive play that we should expect from the creator of Geometry Wars.

We've packed a load of screenshots and an awesome-looking B-movie style poster in the gallery here. Go and have a look. Tiny Invaders is available now on the iOS App Store for Ł2.49.
Companies: Hogrocket
Games: Tiny Invaders