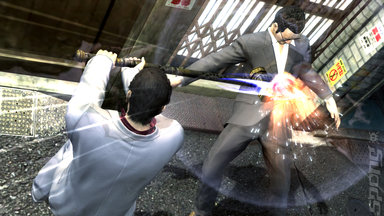 Yakuza creator and fantastically tanned SEGA producer Toshihiro Nagoshi has announced the official forming of the 'Ryu ga Gotoku Studio,' along with the existence of a new Yakuza game for consoles and PlayStation Portable.

Famitsu magazine reports that publisher SEGA has only just decided to green light development of Yakuza 5, relieving fans who thought that undead spinoff Yakuza of the End might have been... well, the end of the series. According to Nagoshi, lengthy discussions were had with the development staff and now have a firm direction for the game.

In previous interviews, the creator has said that Yakuza 4 was the last 'of its kind' for the series in terms of game mechanics. It remains to be seen if the series will continue the plight of Kazuma Kiryu or whether it will kick off a story for a brand new character.

A sequel to Japan-only PSP spinoff, Yakuza Black Panther, is also well into development, and a demo of the game will be made available at the Tokyo Game Show next month. It will join Binary Domain, which has been confirmed as the first project from the newly-revealed 'Yakuza Studio,' as the West calls it. They can't call it the Yakuza Studio in Japan because... well. You know. It's a bit awkward, isn't it?

Of great interest to SEGA fans is the talent that joins the formation of the Yakuza Studio. As well as Nagoshi, central staff includes Masayoshi Kikuchi, Daisuke Sato, Yojiro Ogawa, and Masayoshi Yokoyama. More staff will be added over time.