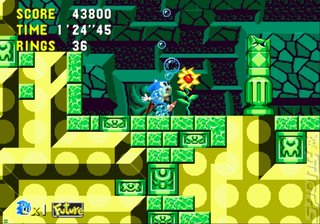 SEGA has officially confirmed that Sonic the Hedgehog CD, arguably one of the blue blur's finest platforming adventures, is heading for Xbox Live Arcade - as well as PlayStation Network, PC, iOS, Android and Windows 7. Blimey.

"We’ve made sure the re-mastered edition has everything that Sonic fans want to see with all of the original colourful classic zones." At least there's that. Best of all, this version will include the original Japanese soundtrack rather than the remixed American one - a key sticking point of all heated Sonic CD discussion has always been which of the two is better.

No doubt we'll get some similar debate in the comments box below. In the meantime, while I start feeling weird about the concept of Sonic CD being a prequel to Sonic 4 and SEGA buggering up the franchise timeline, you can watch a trailer of the remake below, courtesy of Gamespot.

Andy 26 Aug 2011 02:15
1/1
It looks more like a prequel to Sonic 4 episode 2, as if it takes place between episodes 1 and 2 or something. Episode 2 features Metal Sonic, so it's like it's saying "See how [Metal Sonic] all began"
Posting of new comments is now locked for this page.