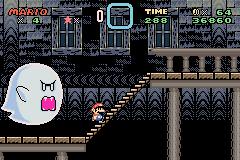 All Images (3) »
The game will be a port of the Miyamoto SNES classic Super Mario World, and will delight fans of the series, somewhat making up for the fairly disappointing Mario Advance, a port of the NES game Super Mario Bros 2.

As the Game Boy Advance shapes up to become the saviour of the industry?s 16-Bit classics, games like Super Mario World are just what the world?s gamers had hoped for. Nintendo has already committed to releasing the Yoshi games from the SNES, as well as Metroid and many more.