Will use Football Pass and Season Ticket. Due early 2012. 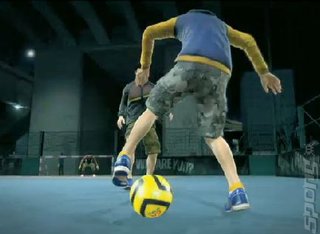 Electronic Arts has opened up its Gamescom 2011 press conference by announcing the return of the FIFA Street urban football series.

The fourth game in the skill-based soccer series will launch in early 2012, and take advantage of the EA Sports Football Pass system that offers access to dynamic community features.

Executive VP of EA Sports, Andrew Wilson, also noted that the game will be one of the first games on offer for the company's new Season Ticket subscription service, offering users early full download access to the game.

It's being developed by the core FIFA team, and there'll be over 30 environments to play in - none of which in the trailer happened to be in any kind of street. Guess EA has taken a bit of a liberty with that one, but there's lots of info to come yet on this one.
Companies: Electronic Arts