Warning: There be spoilers ahead. 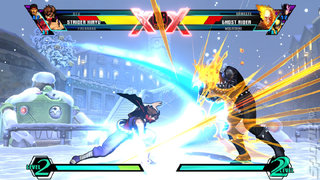 How much of a Capcom fan are you? Willing to pay for incremental upgrades? Last night, the Japanese publisher took things back to the SNES era with the announcement of Ultimate Marvel vs Capcom 3 for PS3 and 360 - and apparently the character roster has already been leaked.

The game was revealed just ahead of the San Diego Comic Con, and will include 12 new characters and a host of balancing tweaks for both characters and net code. A new Spectator mode allows players to watch online matches together.

Capcom had already teased that Strider Hiryu, Ghost 'n Goblins villain Firebrand, Ghost Rider and Hawkeye would appear in the game, but due to a blunder on the company's media site the entire roster was apparently leaked to the world.

The full list reportedly includes Vergil, Frank West, Phoenix Wright and Nemesis on the Capcom side, and Dr. Strange, Nova, Rocket Raccoon and Iron Fist for the Marvel side. Capcom was quick to remove the character images from its media site.

Leaks aside, we should expect Ultimate Marvel vs Capcom 3 to land this November with a budget price to tempt the wallets.
Companies: Capcom
Games: Marvel vs. Capcom 3: Fate of Two Worlds