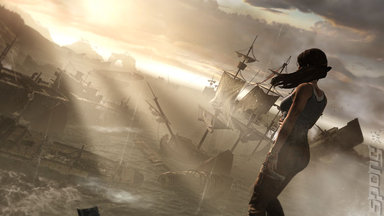 Crystal Dynamics has revealed more exclusively to SPOnG regarding the controversial reincarnation of Lara Croft as a young, naive and terrifyingly put upon girl.

In an interview coming later this week, CD's creative director Noah Hughes tells Svend, about the development of the new Tomb Raider.

At one point, we ask, "You?re obviously going for a bit of a shock angle to drill home this emotional experience, but was there a danger of crossing a line at all in terms of how far you were willing to push Lara?s pain threshold?"

Noah's response is careful but direct, "Yeah, I guess. We felt that it was very important to make her real, and forge her into the heroine that she?ll become.

"Both of those really required her to go through an intense ordeal, to transition from the young and naive archaeologist and become the Tomb Raider. You have to assume that there?s some trials and tribulations over the course of that.

"So, we started with that, and ultimately the boundary was ?what delivers on those needs, of making her feel a human and forging her into a hero without being gratuitous.? So that?s where the line is: come at it from the goal space and stop at gratuitous."