No GameCube DVD hybrid for America as Europe waits

Will they or won't they? Amazing machine might be Jap exclusive 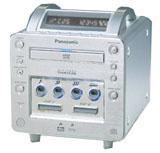 Panasonic of America has declared that the GameCube DVD player hybrid known as Q will not be put out to American retail.

Company spokesman Kurt Praschak said, ?It's simply a Japan device. Right now there are absolutely no plans for US marketing.? News that will no doubt frustrate American GameCube fans.

In a way, this might be good news for European gamers. Nintendo and Matsushita (Panasonic in Japan) will have much more time to assess the situation for a European release of its fantastic looking machine. It might also decide that there would be greater demand for it in Europe, a region that is second only to Japan in terms of mass-technology fetishism.

As soon as there is a decision, you will be the first to know.