Benchmarking driving games with EA: Can new Need for Speed make the grade? First screens inside

Will new NFS live up to expectations? 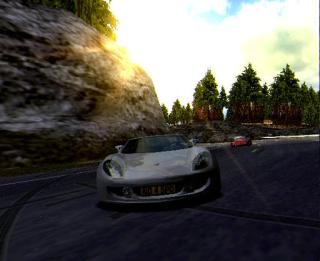 The game is an illegal road racing simulator, in which the player gets to race prestige licensed cars from Lamborghini, Porsche and Ferrari around a total of twelve tracks, all the time avoiding capture by the police.

The question is, can any driving game live up to the standards set by Polyphony?s Gran Turismo 3 or Criterion?s Burnout?

Developers of racing games used to have it pretty easy back in the low-tech days. As other genres that rely less on technology to provide quality gaming marched forward, the driving genre just floundered around with gimmicky innovations to justify any new release.

This all changed when Sega released Virtua Racing, the first truly 3D racing title. This was quickly followed by efforts from Namco, and soon realistic 3D driving experiences were expected.

With the release of the Gran Turismo series, culminating in the awesome GT3, the standards in racing games have been raised head and shoulders above anything else.

Electronic Arts is very keen to point out that Hot Pursuit 2 is an arcade-style racer, but will this compare to what is being developed elsewhere? Let?s just hope that Black Box has bothered to spend a few minutes with the Saturn version of NFS and can finally resurrect the classic series.