This game just gets better and better! 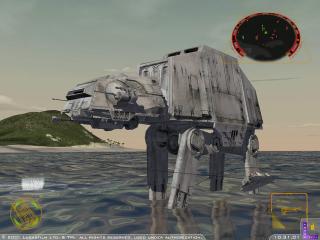 All Images (5) »
LucasArts has released the latest screens from the completed version of its GameCube shooter Star Wars Rogue Squadron II: Rogue Leader.

The new level shown is Kothlis, and as you can see, the AT-ATs are on the march, again being hampered by Rebel forces.

We were very much impressed by the way the AT-AT moves through the water. It looks so real that we really were blown away. The game has come on leaps and bounds since we first got to play it at E3 last May, and every batch of screens uncovers a new wonder.

Rogue Leader will be a GameCube launch title next year.