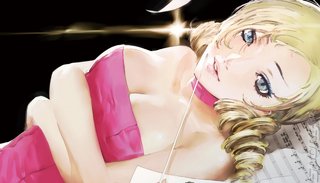 The ESRB has rated the Japanese lust-fest that is Catherine, but in perhaps the best possible way, detailing topless demons and chainsaw babies. Parents, know your knowledge.

"Throughout the game, sex and sexuality are frequently referenced, sometimes while two characters are in bed together," reads the summary, which includes dialogue quotes such as "I finally became a man! Got rid of my V-card, BOOM." Nice.

It continues, "one bedroom sequence pans across a man's legs, then to his curling toes; another scene briefly depicts a woman caressing her body while making suggestive comments (e.g., ?I've got such a hunger for these feelings . . . I know you have some hungers as well, don't you?? )." I think we all know at this point that the game is pretty sexual.

"The game also depicts the central character surrounded by topless female demons?though shadow effects obscure most details. The words ?f**k? and ?sh*t? can be heard in the dialogue," and one of the enemies detailed in the summary is written as a "chainsaw-wielding baby." If Catherine's not on your wanted list after that, then there's either something very wrong or very right with you.
Companies: Atlus
Games: Catherine