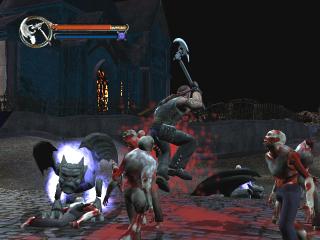 All Images (8) »
Interplay has released shots of the completed build of Hunter: The Reckoning for Microsoft?s Xbox games console.

The game is an action title based in the macabre and somewhat disturbing World of Darkness universe, the White Wolf series of RPGs.

"As an original title designed for Xbox, the development team at High Voltage Software has been working closely in conjunction with White Wolf Publishing to make Hunter: The Reckoning the purist gaming experience immersed in the rich fiction of White Wolf's World of Darkness." stated Jim Molitor, President of Digital Mayhem at Interplay Entertainment Corp.

Hunter: The Reckoning will be ready for European launch alongside the Xbox on March 15th 2002.