Soul Calibur 5 for 2012 - Tekken vs Street Fighter 'Not Started' 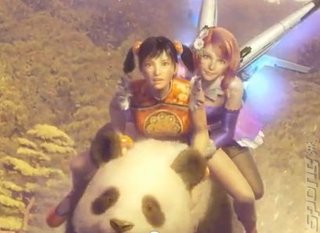 Tekken Movie. Panda.
Namco Bandai put its Level-Up press conference to death in Dubai this morning with several announcements to lighten the hearts of gamers who can't have too much of a good thing.

In short, Soul Calibur V will be arriving for you to beat the hell out of Sophitia Alexandra?s son, Patroklos, among others. CVG was told by UK PR lead, Lee Kirton, "There are some secrets waiting to be revealed on Soul Calibur V that I can't go into at the moment. It's very exciting and will stand out from the other fighters,"

Dark Souls is confirmed for October 2011 in this part of the world. According to VG247, there will be"'excellent' pre-order content to come for the game for PS3 and 360."

Inversion is dated for February 10th, 2012 February unless you're in the USA, when it's out on the 7th.

First-Person-Shooter, Bodycount is out sometime in the summer of 2011, according

Ace Combat: Assault Rising is due on October 14th in Europe, with the USA getting is on the 11th.