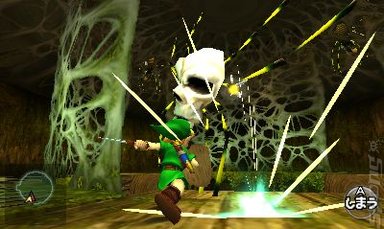 If you're wondering when the hell the next batch of Nintendo 3DS games is going to be released, you need worry no more as Nintendo has just announced its release schedule for the next couple of months.

The one that everyone's talking about - Legend of Zelda: Ocarina of Time 3D - won't be hitting European store shelves until the 17th June. Submarine puzzler Steel Diver will arrive more promptly on the 6th May, while Tecmo Koei's Dead or Alive: Dimensions will be released on the 20th May.

April will see one third-party release in Square Enix's Puzzle Bobble Universe (21st April), and LEGO Pirates of the Caribbean will be hitting on the 13th May. Other releases include Sudoku, Sports Island 3D and Naruto Shippuden 3D, landing on 26th May, 2nd June and 17th June respectively.

Looking forward to any of these titles? Wondering if they'll use and abuse all the 3D, StreetPass and wireless functionalities of the 3DS console? Let us know in the comments below.
Companies: Nintendo
Games: The Legend of Zelda: Ocarina of Time 3D