Jill Valentine and Shuma-Gorath not the end of the DLC fun. 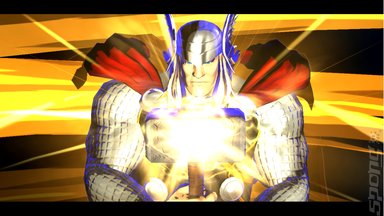 Capcom has announced that it has shipped a whopping two million copies of crossover fighting game Marvel vs Capcom 3, but has described the feat as merely "successful." Maybe that's the humble Japanese attitude coming through, there.

The sequel was released on 18th February following an 11-year hiatus for the series. "Capitalising on the resurgence of the fighting game boom that began last year, Marvel vs. Capcom 3 was able to exceed its predecessor and ship two million units worldwide," the company said. So yes, very successful then.

To celebrate, additional new costumes and characters will be coming soon. Jill Valentine and Shuma-Gorath seems to be just the tip of the DLC iceberg. In the meantime, you can check out the first pack of downloadable Shadow Mode content for 80 Microsoft Points ($1), seeing you fight against three different AI teams from Resident Evil, Street Fighter and Darkstalkers.
Companies: Capcom
Games: Marvel vs. Capcom 3: Fate of Two Worlds