Everyone wants to be a Pokemon master. 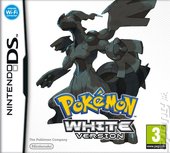 Do not underestimate the power of the Pokemon. Nintendo's latest monster-catching RPG has taken control of the top two spots on the UK Video Game Chart this week, with Pokemon White the more popular version over Black. It must be that hard-looking Zekrom chap on the cover. He'll electrify your nackers off.

Just behind Pokemon Black Version in third place is EA's new round of its boxing series, Fight Night Champion. The pocket monster fever has knocked Killzone 3 off of its #1 perch after just a week at the top, and Guerrilla Games' FPS finale now sites at #5. Bulletstorm suffers a smaller drop to #4.