Soldiers go into a mission knowing they may never return... with FIFA tech 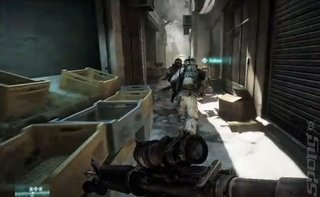 Battlefield 3 has a new trailer that the entire universe is calling "awesome" and "incredible" and "very war'ish". We'll let you make your own mind up...

The vid is of the PC version of the battling game from DICE - console versions of the trailer maybe more or less "awesome".

DICE's Tobias Dahl explained that the reason the game is so packed with more good looks than a Miss Universe meets an Iron Man competition is that elements of Madden 11 and FIFA 11 are used in its graphics.

"Naturally, I started looking into the sport games because what they have is animation. That's what drives their games. It looks pretty good, I'd say", he told Gameinformer.

And there was us thinking it was gameplay that drives games. Get with the 21st Century, eh SPOnG!