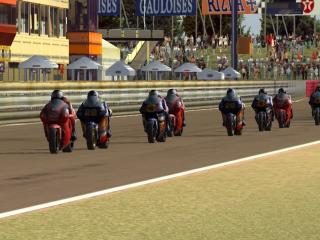 All Images (3) »
The highly playable superbike simulator Moto GP will be coming to the Xbox. The game has already racked up big sales on the PlayStation 2 due to its playability and good looks. Moto GP is widely regarded as an excellent racing game and to be a part of the Xbox library can only help raise the standard of Microsoft?s software catalogue.

Moto GP is by no means an exclusive or an original title, but solid sporting games have traditionally been associated with successful consoles. If Xbox can have one ?triple A? title in every possible genre, it would certainly become be an attractive proposition.

The graphical gusto of the Xbox will improve the visuals of Moto GP and the extra processing power can allow for improved physics models and handling. Additionally, full scene anti-aliasing will remove the jaggies seen in the PS2 version. Have a look at these screenshots and see what we mean.