Lets you get in touch with her 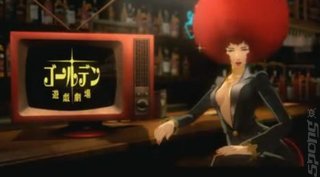 The trailer includes the opening animation for the game's demo, the intro for the in-game "Golden Theater", a new spin on the late night movie show format, hosted by the female with the giant red afro, Midnight Venus.

The host also questions the audience if they have heard the rumours that if they see a nightmare where they're falling and don't wake up right away, they then die in real life. The game's titular character then gets an introduction in the title. New footage is also shown including the the in-game Stray Sheep Bar's bathroom.

You can check out the video down below and let SPOnG know what you think by responding in the Comments section below.