Hironobu Sakaguchi Can't Be This Good! 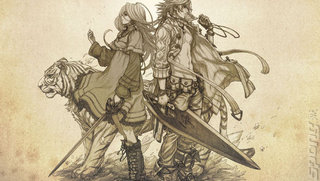 It?s out with the old and in with the new, as the Japanese video game chart does its Spring cleaning early this year (24th - 30th January 2011, courtesy Media Create). Hironobu Sakaguchi?s latest RPG, The Last Story, debuts at the top of the chart thanks to its pedigree and sales of a Wii hardware bundle pack.

Sega?s Valkyria Chronicles 3 was also released this past week and entered at a strong #2 position, selling over 102,000 units. That?s besting the first-week sales of its previous PSP title of 94,000 units. Prominent school brawler Kenka Bancho hasn?t performed as well as it should have, hitting #4 with under 60,000 units sold.

The top 10 - and indeed, the Top 20 - is packed with new releases, including ASCII?s A Certain Magical Index, Spike?s localisation of Dragon Age Origins and D3?s Dream Club Zero representing the Xbox 360 there. Popular comedy manga adaptation My Little Sister Can?t Be This Cute is probably the most concerning title, if you?ve never seen the anime. Or even if you have seen the anime, to be brutally honest.
Companies: ASCII Capcom D3 Publisher of Japan Namco Bandai Nintendo SEGA Spike Square Enix
Games: Donkey Kong Country Returns Dragon Age Origins