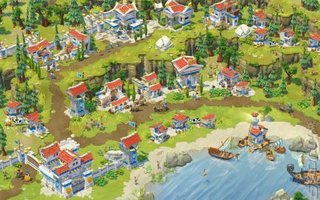 Microsoft Game Studio's online reboot of Age of Empires is to follow a free-to-play business model, with the addition of social features and persistent civilisations.

Although the game plays a lot like past games in the classic RTS series, there is an emphasis on not blowing your creationary wad all at once and instead a focus on building your civilisation up over a period of time. Cities will earn resources and get on with things long after you've switched off.

Of course, while free to play, Microsoft will be offering a Premium Civilisation pack that allows players access to exclusive "rare" and "epic" items, while those who continue to be stingy will only ever be able to collect commoner's stuff. Microtransactions are also touted.

"We don't want to nickel and dime you; we're trying to build a community," said Microsoft Games Studios' Ian Vogel (via Gamasutra). "We're not just trying to sell you a product. We want to have something that's living and growing moving forward."