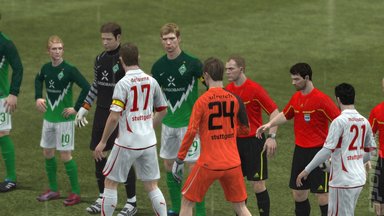 Career Mode
Apparently, FIFA 11 follows your team's ability to capitalise on set-pieces by being "lame". That's not us saying it, it's EA's producer on the title, David Rutter.

Rutter doesn't stop there in his bid to ensure that everybody is ready for FIFA 12 to be better than FIFA 11 - which was, according to EA, already utterly brilliant. He also lays into the current AI.

"I think we did a great job with the Personality Plus feature [in FIFA 11 but the the teams [AI] doesn't support that quite as much as it should." He uses the fact that gangling giant Peter Crouch can be in the goal area, but the opposition AI won't play in high-balls.

As for set-pieces, well, they are "still a bit lame." In fact, Rutter, gets, "frustrated by not being able to do quick throw-ins, not being able to quickly select my free-kick takers, on the fly stuff. We're somewhat last-gen in the way the game cuts," he says.

Never fear though, FIFA 12 will have more 'soul' (whether that means better AI or just funkier AI isn't stated). He states that events such as a return of a player to his old club will see "the boo boys come out, or his old team are more aggressive in the tackle towards him."