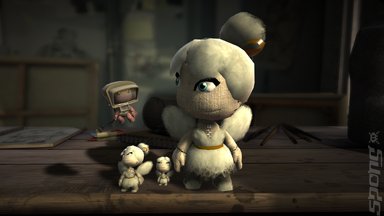 The Charts are in and Sony is triumphant with LittleBigPlanet 2 from UK-based developer Media Molecule slams in at Number 1 taking on big-hitters from Activision, Ubisoft, Nintendo and Electronic Arts.

LBP 2 shows that Sackboy - or 'Sackperson' - as the iconic character is now known - has legs, with its #1 chart entry being three spots up from the original game's placing on release.

Mass Effect 2 comes back into the Top 10 based on its re-release on PS3. On the downside for Sony, DC Universe Online sinks out of the Top 10 and ends up as #22.