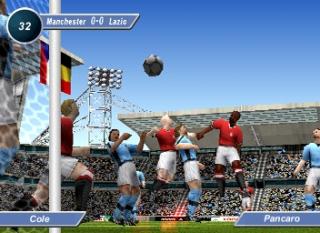 Due for release on GBA and PSOne this November, and next year for Xbox and PlayStation 2, the incarnations of the game should be storming the retail sector just in time for Xmas and the World Cup respectively.

"David Beckham is currently the most famous sports star in the country, if not the world today and we are delighted to be making his only officially endorsed range of video games,? said Glen O?Connell, Communications Director at Rage. ?Our game offers a mixture of fluid and competitive game-play, a wide and varied selection of playing modes and an exclusive ?train with Beckham? facility where David teaches you how to perform his free-kicks and other football skills. David Beckham Soccer is the only game where you can train like him, play like him and be him.?

And why not? You may have noticed that following the Greece game and subsequent qualification to the World Cup, no one has a bad word to say about Beckham. Even Leeds United fans and the blue half of Manchester are waxing lyrical about his sublime passing and unprecedented work rate. Rage will be hoping that Beckham manages not to kick any Argentinians in the next few months. At least Veron is safe for the time being.