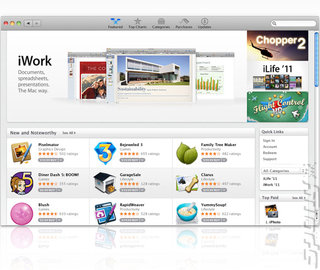 Apple has launched its Mac App Store today, and already it offers a large range of big name, independent and budget games for the OS X player to explore.

Crucially for Macintosh users, the arrival of the Mac App Store marks the start of a dedicated games strategy from the company, no doubt fuelled by the success of iOS games and the arrival of Steam for the Mac. Games are generally categorised under the 'Entertainment' banner, but a page is reserved on the store for highlighting new game arrivals from developers big and small.

Gamers can buy a number of games at a 50% launch discount, including Angry Birds (Ł2.99) and Penny Arcade: The Precipice of Darkness (Ł2.39). It seems that the low prices of budget titles on iOS devices have not prevented larger games from appearing on the service, with Bejeweled 3 costing Ł11.99 and LEGO Harry Potter: Years 1-4 on the service for Ł29.99.

The new storefront was announced by Apple CEO Steve Jobs back in October. Since then, developers have been submitting software for approval on the service, which works in a similar fashion to the iOS App Store on iPhone and iPad. Over one thousand applications are available right now with, no doubt, more to come.

If you have a Mac computer, you can get the Mac App Store by performing a Software Update. The website for more details can be found here.
Companies: Apple
Games: LEGO Harry Potter: Years 1-4