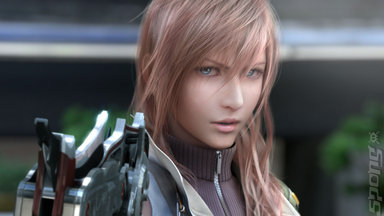 Toshiba showed a series of glasses-free 3DTVs at this year's CES. The TVs were showing Square Enix RPG Final Fantasy XIII. The combination may be with us sooner than you expect too.

According to Engadget, the newest brand of 3DTVs will become available to the consumer public around the end of the fiscal year, providing a release window of early 2012.

The displays will allow users to watch 3D programming without the need for glasses and news website Reuters has reported that the Toshiba will "probably launch two [retail] models, one over 40 inches and another over 50 inches".

Toshiba's head of visual products Atsushi Murasawa told reporters (of the 3DTVs) that: "These will not only be for the Japanese market, but also America, Europe and China."

Excited at the prospect of glasses-free 3D gaming? And would you want to see FFXIII playable in 3D too? Feel free to post your thoughts in the Comments section below.

Svend Joscelyne 6 Jan 2011 11:49
1/1
Brother's somehow acquired a 3DTV recently - got to admit, watching Super Stardust HD in 3D is pretty awesome. It's a pretty nice novelty for me though, not a necessity - I certainly wouldn't mind 3D in my TV if it was cheap enough and didn't require those silly glasses.

Of course, mileage on 3D itself is totally gonna vary depending on the film/game/whatever you're experiencing. SSHD is brill as I said, but Pain is a little wank in 3D. Similar to how Avatar's 3D was swish, and Alice in Wonderland's was complete toss.