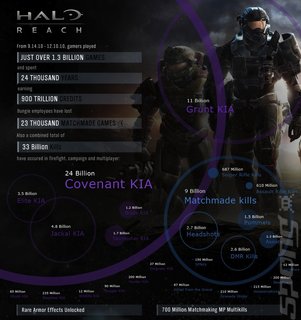 A recent post over on the official blog of Halo developer Bungie has revealed the number of matches played by avid fans of its most recent entry in the franchise, Halo: Reach.

The stats show that just over 1.3 billion games have been logged since the game was released back in September. It also shows that players have spent 24 thousand years obtaining 900 trillion credits (the in-game currency), Bungie employees have lost 23 thousand matchmade games (with :'( face) and that a combined total of 33 billion kills have been recorded via the firefight, campaign and multiplayer modes in the game.

The little fact sheet contains many other interesting facts and figures, of which you can check via the image in this very story.