Gears of War 3 to Reward Players of Past Epic Games 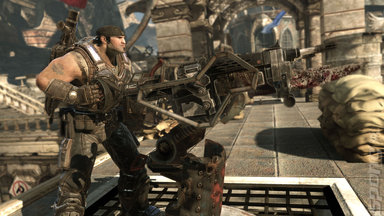 Gears of War 3 will feature unlockable content for fans of Epic Games' back catalogue.

Players of Shadow Complex, Unreal Tournament 3, Bulletstorm and (of course) other games in the Gears of War series will see some special bonuses when the Locust-killing sequel rolls around next year. Epic's Cliff Bleszinski revealed the feature on Twitter yesterday.

"Look for special unlocks in Gears 3 for those of you who have played other Epic games such as Shadow Complex, UT3, Gears, and Bulletstorm," he writes. And with that, he vanished into the mist. Or, just kept Tweeting, whichever sounds better in your mind.

No word on what exactly these unlocks will entail, but the safe money is on Avatar items or multiplayer skins. Epic could pull a virtual rabbit out of the hat though, we'll just have to keep an eye on whatever space the company decides to announce the content on.
Companies: Epic Games
Games: Bulletstorm Gears of War Gears of War 2 Gears of War 3 Shadow Complex Unreal Tournament 3