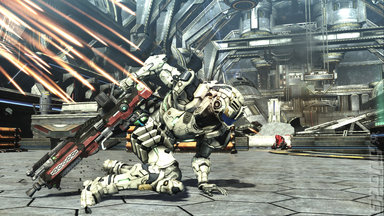 Sega's VP of sales and marketing Alan Pritchard has revealed that the company's deal with Bayonetta developer Platinum Games is going to run a little longer than originally planned. The studio is working on another title with the publisher.

Originally, the publishing deal between Sega and Platinum only accounted for four titles. Those titled were MadWorld, Infinite Space, Bayonetta and Vanquish - but producer Atsushi Inaba said back in October that he hoped the partnership could be extended.

With Pritchard's words to Game Informer magazine - "We have a further title to announce from Platinum Games as well" - it seems that an extended deal has been worked out. Sega would have been crazy not to have jumped on the chance - Platinum has been a source of critical acclaim for the company over the last couple of years.

Take a look at the evidence - as reported by SEGAbits - here. It's hidden in the answer to the fifth question, if you get stuck and need to phone a friend.
Companies: Platinum SEGA
Games: Bayonetta Infinite Space MadWorld Vanquish