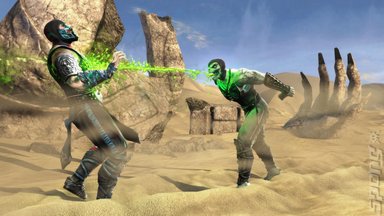 Kratos? In MY Mortal Kombat reboot? It's happening, and sooner than you think as well - Warner Bros. Interactive has confirmed that the gore-loving fighter will be available from April 2011.

The God of War hero will be joining the likes of Scorpion, Kung Lao and Reptile in an MK game that goes right back to the series' bloody roots. Director of God of War III, Stig Asmussen said that "it was a no-brainer. Fans of both games have been asking for this to happen."

Mortal Kombat will also come with two different special editions, Warner has revealed. The Kollector's Edition will include figures of Scorpion and Sub-Zero, an art book and DLC for a Mortal Kombat Klassic costume skin and avatar costumes.

There will also be a Tournament Edition, which will come with a portable fight stick and the Kollector's Edition DLC. This will only be limited to 20,000 copies though, so if you're interested you better prepare yourself for retail Kombat.

In the US, there will be several retailer offers for pre-ordering the game, with Klassic character skins and original Fatalities for either Scorpion, Sub-Zero or Reptile depending on your store of choice. There's no word if these will be available in the UK, but damn that's some incentive for a day-one purchase.
Companies: Warner Brothers
Games: God of War III Mortal Kombat