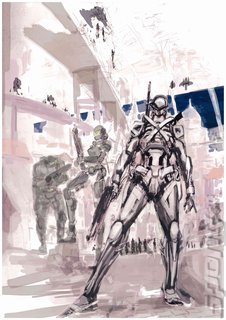 All Images (3) »
The director of high-octane 3rd-person shooting game Vanquish, Shinji Mikami, has posted on his blog with details and early prototype art for the game released this October.

The post carries details and thumbnails of the game in the early stages of development. Mikami explained that in the game's early stages the suit protagonist Sam Gideon wears in the adventure was empty, instead being a remotely controlled robot and being commanded by three separate pilots taking turns from a distance.

Each pilot would carry a specialism such as shooting, melee, hovering or sniping. Mikami added that he and his intended to make something interesting out of the pilots' interactions, similar to Japanese TV show Kamen Rider Den-O but the idea was laid to rest at an early stage in the development process.

He also explained that ideas left out or rejected from Vanquish may be used in later projects in a revised form, leaving the doors open to see some great ideas potentially being brought to the table.

What do you think of the concept work for Vanquish? And what sort of game do you want to see Mikami work on next? Any thoughts, feel free to post them in the Comments section below.