Win the drive of a lifetime with Colin McRae. Nappies not included

Really one of the best prizes ever! 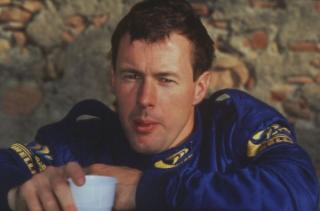 Colin knows all... honest
Codemasters is celebrating the release of the Ł12.99 budget version of the excellent rally sim Colin McRae Rally 2.0 for PC by offering you lucky people the chance to get scared witless as the passenger in big Col?s Focus.

As soon as the World Rally Championship concludes, McRae will be heading off to deepest Cumbria to take six lucky winners on what for rally fans must be classed as THE drive of a lifetime.

?The promotion is fantastic!? said Nicky Veal of Codemasters. ?It's not only the ultimate rally experience but an incredible rare opportunity for anyone to sit alongside Colin in the Focus. We've built a great relationship with Ford Racing and its contribution into making this event happen makes for a superb awareness-grabbing promotion.?

The game comes bundled with a CD-ROM that will feature rally footage and various desktop themes.

Martin Whitaker, European Director Ford Racing, added. "Believe me, a chance to sit alongside Colin McRae is an opportunity not to be missed! Colin and his fellow competitors in the FIA World Rally Championship have a special gift when it comes to driving a competition car fast and the only way to really experience his car control is to witness it at first hand. Roger Clark, the man who was such an influence on Colin at a young age, once said that he was "always in control of a rally car as long as he wasn't looking out of the rear window" - ride with Colin and let him show you how it's done! You won't be disappointed."

We will bring you news of the next Colin McRae game for PlayStation 2 as soon as we get it.