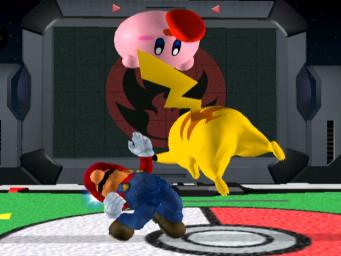 The developer explained that the game provided a gruelling development cycle. He added that he worked on the title for 13 months straight, without taking either a single Sunday or holiday off during the duration, highlighting that "I'd work for over 40 hours in a row, then go back home to sleep for four."

The developer attributed his dedication to the project by saying that he felt like a man on a mission. The original N64 version of Smash Bros. had no pre-set guarantee for success, meaning he could craft the title into its own type of fighter.

With Melee, Sakurai explained that Nintendo new exactly what his expectations were with the new title, explaining that the game was the biggest project he had headed up to that point.

He added that he looks back fondly on Melee, seeing it as "the sharpest game in the series," and that "It's pretty speedy all around and asks a lot of your coordination skills. Fans of the first Smash Bros. got into it quickly, and it just felt really good to play."

Sakurai also commented on the accessibility of the game, explaining that "I had created Smash Bros. to be my response to how hardcore-exclusive the fighting game genre had become over the years." He added that he doubts there will ever be as hardcore a title as Melee in the series, past or present and said that "Melee fans who played deep into the game without any problems might have trouble understanding this, but Melee was just too difficult."

What do you think of Super Smash Bros. Melee? And have you ever worked 40 hours in a row on something you love? Any thoughts, feel free to post them in the Comments section below.

Tone 9 Dec 2010 13:24
1/2
i enjoyed melee very much on the gamecube, was the only game that survived from being traded in; i buy games complete then trade in for future games unless they prove to be really enjoybale that i would happily play them again and again.
Melee proved to be one such title; currently its sitting on my shelf at me ma's place as she has the wii there, i play a couple of times but brawl is the one i mainly play when i have a chance which is not too often unfortunately.

gingineer 9 Dec 2010 14:11
2/2
I saw a 2nd hand boxed copy of the N64 original in gamestation for over Ł30! someone must value that version!
Posting of new comments is now locked for this page.