And some say the best one! 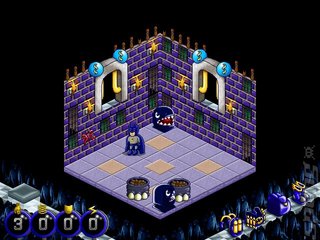 Now this is cool - Tomaz Kac has gone and lovingly remade the original BatMan video game. The ZX Spectrum, MSX and Amstrad CPC/PCW title was originally developed by Jon Ritman and Bernie Drummond and released in 1986 by British games house Ocean Software.

It takes a decidedly Adam West-style approach to proceedings with Batman trapped in his Batcave with deadly creatures, tasked with collecting seven pieces of the Batcraft to save Robin. If the 3D isometric gameplay all looks very familiar, then you may remember that Ritman and Drummond also made the follow-up, Head Over Heels.

This update includes some adorable colour visuals, better sound effects than the original and the addition of a hidden room that wasn't accessible before now. You can download it for Windows computers at the Retrospec website - and we'd do it now, before someone comes along and deems it worthy of sending a Cease and Desist over, of course.
Companies: Ocean
Games: Batman