More updated classics for your PS3 and PSP! 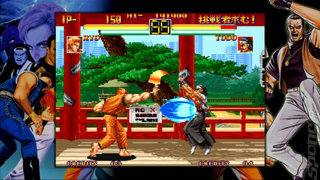 Now you can add another, console-shaped, reason to envy the Japanese PlayStation Network - SNK Playmore has announced it will be bringing a collection of NeoGeo games to the PS3 download service.

The NeoGeo Station follows Sony's own PlayStation and Hudson's PC Engine/Turbografx on PSN. While SNK Playmore aims to offer its games for both PS3 and PSP, it plans to do this by selling separate versions for each platform.

Players will be able to take advantage of several new features in these updates. Save states, custom button layouts, screen sizes, startup menu skips and a replay option will feature in each game. PSP owners will get the added bonus of ad-hoc multiplayer, while PS3 versions will include online play and friend list support.

So when are we getting these in Europe, SCEE?