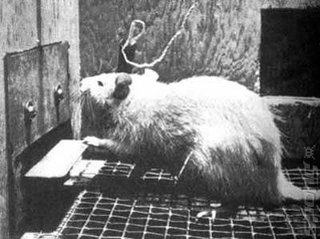 The BBC's Panorama show - 'Addicted the Games' - which airs in the UK tonight at 8:30pm, will detail how the games industry uses psychological tricks to force gamers to keep playing.

The program will quote Adrian Hon, chief creative officer of SixToStart - which cites the BBC as a client stating that, game companies "use a simple technique based on a 1950s study of rats feeding themselves by pressing a lever."

The Press Association - which is being used as the BBC mouthpiece for the show - describes this as, "The "variable ratio of reinforcement" (or operant conditioning) basically sees people acting a certain way because they are rewarded for that behaviour."

Mr Hon, states that, "I think people don't necessarily understand how powerful some game mechanics can be.

"It's one thing to think 'okay, I'm playing too much,' but it's another to just stop playing, because some games are designed in a manner that you just don't want to leave."

The BBC corporation certainly is, given that it's using Mr Hon's company for its own purposes.

The AP report also quotes Professor Mark Griffiths, from Nottingham Trent University's International Gaming Research Unit, in relation to the show. The professor will apparently state that rat ruse apparently used by game developers is, "a neat little psychological trick and for most people this will not be something that's bad, but if you've got... that vulnerability or susceptibility to addiction that will keep you in the game probably far in excess of what the normal person would do."

Prof Griffiths, is sanguine about the 'threat' though, stating that,"The good news is that for the vast majority of people video games is something that is very positive in their lives."

But of course, you're not going to get viewers if you don't quote someone like "Teenager Joe Staley, from Nottingham". Talking about a Call of Duty game, Joe states that, "I wouldn't move from my bed. My controller would be at my side table, I would turn it on, play, and then I would realise it was about three o'clock in the afternoon."

Strangely we've talked to someone who was approached about the program who told us that he was lead to believe that it was going to be about broadband take-up. More on that later.

ohms 6 Dec 2010 13:47
1/4
I think Panorama has generally just declined in recent years. It's virtually tabloid TV now.
Many recent ones I've seen have just been scaremongering and shallow.

ohms 7 Dec 2010 00:04
2/4
So, these t**ts on Panorama, sit there all day, waste their lives, their money, then blame the game for their problems. Can any f**ker who blows all their money and time on something these days, absolve themselves of all blame by calling their stupidity and inability to manage their lives, an addiction?

DoctorDee 7 Dec 2010 06:42
3/4
ZOMG, games reward you for playing them. Shocker. I mean, if they didn't.... why would anyone play them at all? Maybe it's just the basic mechanics of what makes them entertaining and rewarding, rather than some plot to lure pathetic losers.

Anyone who becomes addicted to anything simply does not have enough "else" going on to distract them from the one initially enjoyable thing that they then become obsessed with. Over obsession with any thing has a downside (cost, you don't see your friends, your hair falls out and you die of cancer), it's whether that downside is negative enough to detract from the perceived lure.

gingineer 7 Dec 2010 15:21
4/4
Doctor Dee is spot on here, a level of addictiveness is derived from the fact it is made to be fun, and well who isn't addicted to fun things.