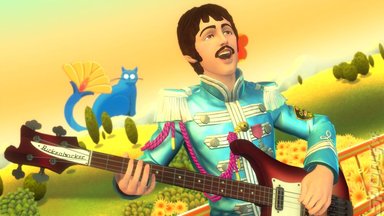 Electronic Arts CEO John Riccitiello has been having a bit of a pre-Xmas splurge when it comes to taking what we English like to call 'a pop' at both Farmville and Harmonix, which is up for sale by Viacom.

In terms of Farmville maker, Zynga, which - in terms of market capitalisation is now worth more than EA and which competes with EA acquisition Playfish - Riccitiello is scathing, "Zynga has a chance that ?Farmville? will stand the test of time successfully, but it?s far from clear to me that that?s a certainty," he told Bloomberg.

But his sharpest barb is saved for Harmonix, which makes Rock Band, a franchise that EA distributes but is not going to buy from Viacom apparently.

"I?m sure some smart investor will buy the business feeling that they can catch a falling knife, but more people have been cut trying to catch falling knives than have benefitted from getting the timing exactly right."

So, what does the future hold? "There are probably 25 companies on our radar that would make sense for us at somewhere between five and 10 percent of the asking price", however, he continued. I don?t need a billion-dollar acquisition.?