More discontent in the Land of the Rising Sun. 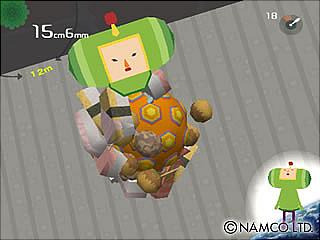 There was once a time where the world looked to Japan for inspiring video games. Katamari Damacy creator Keita Takahashi has opined that time has long since passed, and won't get better until the country's industry carefully re-assesses its situation.

"The Japanese industry is like a zombie," Takahashi said in an interview with GamesTM magazine. "We don?t know what to do until we?re at the very bottom, and only then can we start looking at where things are going wrong."

The creative notes that Japan has "never hit rock-bottom" because whenever a dip in interest occurs new technology such as the PlayStation Move arrives to give the industry a little lift back up again. His words suggest that the Japanese games industry would benefit from nothing short of a complete collapse and rebuild.

"I think in Japan there?s too much a focus on sequels. There are too few genuine original games being made and, for me, that is why Japanese gaming is not doing so well at the moment," Takahashi added.

His words follow comments from several high-profile figures in the industry that suggest similar thoughts - the most recent being from former Capcom boss Keiji Inafune, who said that Japan's game quality was at least five years behind everyone else's.
People: Keita Takahashi
Games: Katamari Damacy