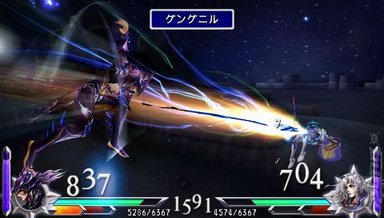 The official website for Square Enix crossover game, Dissidia 012 Final Fantasy, has updated with new character information for some of the playable roster in the game.

The site provides details on the switch attacker concept in the game which sees Vaan switch between different weapons in order to use his various skills. His Brave Attacks in the game will each be associated with a different weapon, seeing the protagonist from FFXII use up to eight different weapons as well as his bare hands. It also shows Vaan in his "Another Form" appearance (think alternate costume).

Three returning characters from the first Dissidia game, Tina Branford (FFVI), Cefca Palazzo (FFVI) and Gabranth (FFXII) were also detailed with their "Another Forms" viewable too at the official website.

Continue to check SPOnG for updates on Dissidia 012 Final Fantasy leading up to the game's release.