That's how big it is 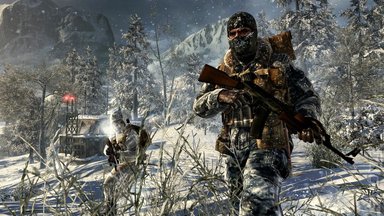 The news this morning that Call of Duty: Black Ops has maintained its UK all formats Chart Number 1 spot, beating off Assassin's Creed: Brotherhood and Need for Speed: Hot Pursuit is all the more impressive given the stats.

According to Chart-Track, which compiles the charts based on UK retail returns, "Activision Blizzard?s Call of Duty: Black Ops holds on to the top spot this week despite an 85% drop in sales, forcing Ubisoft to settle for a No2 debut with Assassin?s Creed: Brotherhood."

85% fewer copies sold and the monster that is Call of Duty is still Number 1.

Chart-track continues, "After its blockbuster launch, only 63,000 sales now separates Black Ops from Assassin's Creed: Brotherhood, making it the biggest ever Assassin's Creed launch with 55% of sales on Xbox 360 and 45% on PS3."

So, well done Ubisoft and Ezio.