Megaman Online Video Shows What Its All About 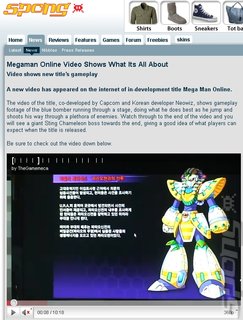 A new video has appeared on the internet of in-development title Mega Man Online.

The video of the title, co-developed by Capcom and Korean developer Neowiz, shows gameplay footage of the blue bomber running through a stage, doing what he does best as he jump and shoots his way through a plethora of enemies. Watch through to the end of the video and you will see a giant Sting Chameleon boss towards the end, giving a good idea of what players can expect when the title is released.

Be sure to check out the video down below.