Ready At Dawn: Why We Got Bummed by PSP but Came Back

Developer quit PSP due to fellow developers' lack of interest. 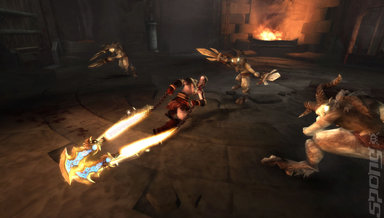 All Images (2) »
Ready At Dawn's co-founder and creative director Ru Weerasuriya has told SPOnG that he is disappointed that the PSP has become something of a barren wasteland for Western developers.

The studio has been one of the key supporters of the Sony handheld, having worked on Daxter in 2006 and God of War: Chains of Olympus in 2008. Shortly after, the company announced it was quitting PSP development, but returned to create Kratos follow-up Ghost of Sparta.

When we brought that turnaround up, Weerasuriya's reasoning lamented the slow developer support that the PSP had received. "In some ways we thought we'd done everything on the platform. Not to sound big-headed or anything, but that's one of the reasons we got a little bummed about it.

"At the time we really felt like nobody else really wanted to push or, you know, had the desire to actually do more for the platform. And that bummed us out because we looked at it like, "Okay, this is going to be great, this platform is going to be awesome but if not enough people support it, it's always a hard fight to have. Competition's always good, let's put it that way."

The creative director explained that the potential reason for the lack of enthusiasm for the platform today isn't necessarily the PSP's userbase, or its past development ties - "It's not as if there were not enough people on PSP. I mean if you look at the sales world-wide, they're pretty good" - but rather a mis-marketing of the device.

"I think at the same time people don't think about PSP the same way [as other handhelds]... because you don't have that core experience you expect from a powerful platform. I don't think that I expect a core experience from a GameBoy or a DS either. I do expect more of a casual experience, so something that I feel is more fun to play in small bursts," Weerasuriya added.

During SPOnG's interview with Weerasuriya, we noticed that Ghost of Sparta had been advertised as a title that takes advantage of "100% of the PSP power." The developer said that it wasn't a cheeky claim, but something that Sony's hardware engineers told the Ready At Dawn team outright.

"Funnily enough this line came not so much from us but talking back with the hardware guys, looking back at what could be done; all the things we tried to push; things we tried to break," he revealed. "We broke the PSP as far as, like, pushing too much stuff on it. And breaking it really just means you do things and realise, 'Oh that's not going to work, the frame-rate's dropping to 10 and this is imposssible, there are no ways around it.' So, after talking to them, we were actually told by those guys that "Yeah, you can safely say that this game pretty much leverages the whole PSP."

SPOnG's interview with the Ready At Dawn creative director will be going live later today. Look out for it.
Companies: Ready At Dawn
People: Ru Weerasuriya
Games: God of War: Ghost of Sparta