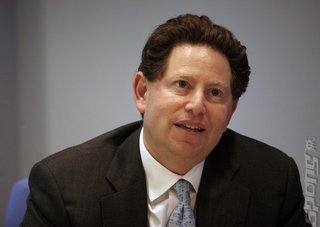 Activision boss and apparent Lord of Darkness Bobby Kotick has stated that his company has no plans to charge pre-owned consumers with additional DLC access fees, as it is "not in the best interest of the gamer."

Known affectionately as 'Project $10,' fellow publishers such as Electronic Arts and THQ have been counteracting the lost profits made by sales of second-hand games by offering 'VIP passes' for free online play and downloadable content to those who buy brand new.

And although Kotick is seen as an executive without the gamer's interests at heart, his criticism of the initiative can only be good news for those who feel like they're being somewhat shafted.

"We?re not doing anything to suppress used games today," Kotick told Joystiq. "We can do some of these things that EA and others have done, but we actually don?t think its in the best interest of the gamer, and so we?ve chosen not to.

"What we?ve tried to do is to really support our audiences and, you know, when you talk to players, they like the idea of having a currency. They like the idea of being able to take a game they no longer want to play and use it to get a credit to buy new games."

There's a twist in the tale, however. Not one to pass on a business opportunity, the Activision boss implied that rather than charging customers for the effects of pre-owned, he would instead go after retail. Kotick stated that the company will be increasing its digitally distributed output to put the sweats on brick and mortar stores.

"From a financial perspective you look at it and say ?OK well the retailer is not paying us anything for the privilege of doing it and you know we invest all this capital in making a game and we are not getting any credit, any return on their resale of the game?," he said. "But, you know something? The best way to keep people engaged in your game experience is keep giving them more great content.

?As business models evolve, as the way you distribute content evolves, as the ability to do things online changes in terms of pricing or trial or sample. I think we?ve definitely always been out in front of the rest of our competitors. But I think you always need to be sensitive to that relationship and not crossing the line to a place where the customer feels like they have been taken advantage of."
Companies: Activision
People: Bobby Kotick

PaulRayment 15 Nov 2010 10:29
1/1
This in the same week (last week) that he said they deserve a bigger cut from MS from Xbox Live fees. There is some mad stat that COD playing accounts for half (or something mad) of all XBL activity!

This would suggest to me that BK needs to give more money to MS since they are supporting COD (I guess) OR he should shut up. What's gonna do, say that he won't produce COD for Xbox anymore?

I find it a bit insulting this banter against EA and THQ. There is even a ticker at the bottom of BLOPS that states that online is free with COD.

I'm pretty disappointed with the BLOP maps compared to MW 1 and 2 but I guess they will have better maps out soon for Ł10 a pop!