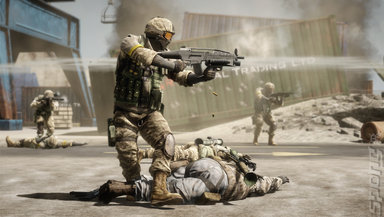 Fans of Battlefield: Bad Company 2 will be thrilled to hear that DICE is bringing two of the series' most popular multiplayer maps from the first game in an upcoming DLC pack.

VIP Map Pack 7 will be free to PC users and owners of the VIP Pass on console versions (remember that $10 Online Pass EA established to circumvent pre-owned sales?) and will include Oasis and Harvest Day, fully revamped for the Bad Company 2 experience.

The new features to the maps include 'Destruction 2.0' (destructible buildings and structures), enhanced graphics and remastered audio. Level designer Cristian Pavel said that many fans had been asking for Oasis to be included as a new multiplayer map, stating that it "contains what Battlefield is all about. A variety of vehicles, from helicopters to tanks, jeeps, and boats. It also has enough space to let players show their creativity when driving these vehicles."

No ETA has yet been announced for the new DLC pack, but no doubt we will let you know as soon as we hear word.
Companies: DICE Electronic Arts
Games: Battlefield: Bad Company 2