From Gamers With No Love 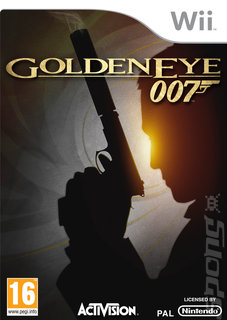 The Wii's viability as a core gaming machine looks shakier than ever with cult classic GoldenEye 007 failed to ignite the UK Video Game Chart this week.

Despite a high profile in media and amongst the gaming community, Activision's 2010 update to Rare's Nintendo 64 shooter only managed to debut at #13 on the GfK Chart-Track All-Formats Top 40.

Activision, for its part, has defended its performance by stating that it "has only been out for a few days, but it's already out selling last year's Modern Warfare 2 as Wii SKU for the comparable period." That's coming from publishing exec Eric Hirshberg during a conference call.

Favourable previews from reputable gaming sources (including SPOnG) and a high interest from gamers seems to have had little impact. Can it be that GoldenEye 007 isn't as important to gamers as they suggest?

Or does it simply highlight a problem that many past core games have suffered - that the Wii audience at large ignores such titles when the Xbox 360 and PlayStation 3 may, in its eyes, do it better?

The publisher aims to improve on the apparent 007 apathy with a television campaign for GoldenEye 007 over the weekend, so perhaps sales will pick up over time. With Call of Duty: Black Ops vying for the same kind of attention however, it seems unlikely to have an impact. What do you think? Let us know your views in the forum below.
Companies: Activision Nintendo
Games: GoldenEye 007

Also, has anyone seen the advert? It's horrible.

And I know it isn't all about graphics but it looks crap too. People are wooed but looks and this looks so dated it's shocking.

"Now, if this hit the 360 or PS3 I bet it would have stormed the chart."
Yeah sure it would've... You think it would've sold more than Football Manager 2011?

Fatsquish 8 Nov 2010 23:08
3/8
Well, I went to buy it on release but no one was selling it without the classic controller! I don't know about everyone else but I don't buy wii games to play them on a control pad. Besides, I already have a classic controller for my VC games. If they released the stand alone pack alongside the special edition, I'm sure they would have achieved far greater sales already.

originaljohn 9 Nov 2010 10:46
4/8
Did you not think of checking online retailers? I ordered mine from amazon no problem. They had stock of both stand alone and special edition

a 9 Nov 2010 14:47
6/8
Doesnt help that the game is not in the shops, more and more retailers are cutting back on the wii space. Nintendo should just concentrate on wii 2 now

John 12 Nov 2010 20:05
7/8
If its nearly end of line for Wii and new next gen consoles on the way, why have they released a revamp of the best Nintendo game ever "Goldeneye" just as the Console is about to bite the dust? Makes absolutely no sense to me whatsoever.

Joe 17 Mar 2011 03:36
8/8
Because it was an insult to the original GE. Nothing that was special in the original GE made a comeback. In fact it was just so generic, and the objectives were so bland. Hack this, hack that. No replayability in most levels. In the 1st level your force to sit through 8 minutes of cutscenes plus the Goldeneye intro when you beat it. No Moonraker laser, No dual weilding, No memorable ost, No unlockables, No 007 inspired MP map (docks and industrial?)

No original cast was a let down, but not even that could have saved this game.