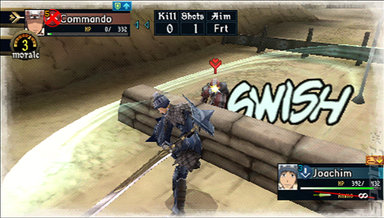 Fans of the Valkyria Chronicles set of games will be pleased to hear that yesterday SEGA held a promotional event for the demo of its newest entry in the series together with sharing more details on the latest in the franchise, Valkyria Chronicles 3.

The event was held at the company's Haneda headquarters in Japan earlier today with attending fans getting a chance to try the game's demo early as well as throw some questions at the producer and director of the title, Shinji Motoyama and Takeshi Ozawa.

The Q & A session was covered on the company's dedicated Valkyria 3 twitter page with some of the major questions eluding to whether fans would see a Playstation 3 iteration of the series again. Motoyama replied that he has no preferences when it comes to hardware and that he understands why players want another PS3-based entry in the series with the first game being released on that platform. He added that the development had to carefully consider which platform they would continue development on and the reality was that the PS3 was not a machine they would easily advance (development) on.

Ozawa added that the development team considers Valkyria Chronicles 3 to be the first true sequel in the franchise with the reason given that the transition from PS3 to PSP with VC1 to VC2 meant that they experienced a big trial and error phase. However, as there was no change in hardware this time around the team were able to focus all of their energies on VC3 and tweak and tighten the areas of VC2 that the team were not too happy about.

Moving away from the technical aspects of VC3, questions from fans covered subjects such as the game's love simulation elements (Motoyama reiterated that the title is firmly a war drama, not a love sim), the possibility of multiple game endings which Motoyama explained that in the game "There are two heroines, so we've of course readied different ending methods", side stories and the game's overall length with 35-40 hours of play time being Ozawa's response.

The questions continued with queries on DLC which the staff have yet to decide upon although Motoyama added that the downloadable Chapter 0 means this should not be ruled out. VC3, like VC1, will have extra episodes that players will be able to play and enjoy post-main game. VC3's demo will be 160Mb in size with the full game allowing for a memory install of approximately 700-800Mb.

Players who have a save file from VC2 and clear the demo of VC3 will receive bonuses in the full game. Motoyama explained that players who still have a save file from VC1 will also get an as of yet unexplained bonus too. Motoyama also added that cameos of characters from VC1 and VC2 will be in the game and will be integrated into the game's overall story rather than merely making guest appearances.

Motoyama concluded the event by explaining that another press event for the title will be held on November 9th, the same day as the release of the game's demo on the Japanese PSN. Be sure to check SPOnG where we'll have all the details ready and waiting for you (if you can't tell that our interest for the title is in overdrive already).