No idea why he was so angry then 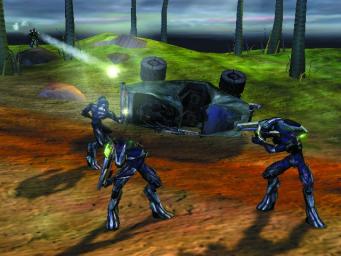 Yesterday we learned that Apple CEO, Steve Jobs was fuming when he realised that Microsoft had bought Halo maker Bungie. Today we find out why: he'd turned down a request to buy the developer... then changed his mind too late.

Ex-project lead at Bungie, Tuncer Deniz, explained to Develop that Phil Schiller ? Apple?s senior vice "asked Steve, who said no. (But) after a week, Steve said yes. Schiller calls Bungie, but Bungie had already consummated the deal with Microsoft".

This tale is corroborated by Ed Fries, the former vice president of game publishing at Microsoft, who explains that Bungie co-founder, Peter Tamte, "told me Bungie was in a bit of financial trouble, and he was looking to sell the company.

"That was at the same time when I was starting to look around, quite desperately, to figure out how to get this launch line-up for the Xbox within two years. At the time Bungie was showing around this concept and trailers for a game they had called Halo, and it looked pretty cool."

Tamte explained that another company was interested... and might Microsoft also be? The rest is gaming history.
Companies: Apple Bungie Microsoft